"I worked on digitizing bathymetry maps for Biscayne bay in Miami, Florida, as well as digitizing and analyzing depths of the main channel in Miami, Florida. The maps of the data that was digitized date back to the late 1800s. These maps were then analyzed to see how tides have changed in the area, and what might be causing these changes tide level. We navigated this in a virtual environment by doing weekly zoom meeting when our schedules allowed it and keeping in touch through email. Few difficulties were encountered, except a few schedule problems, where my academic schedule sometimes overlapped with meetings and I wasn't able to attend.

The most impactful and interesting thing that I learned was the sea level rise and rising tides are causing real problems for coastal cities. These problems include nuisance flooding, which is impactful to the lives of coastal residents. I also learned that rising tides in the coastal area may be caused by direct human activity."

"The work I did included preliminary research about a left shoulder part time travel lane, to be trialed on 101 near Pismo, as well help edit citations for several other reports Dr. Pande was working on at the time. This worked fairly well in an online environment, as none of the research required me to be in a lab, and I was able to communicate effectively with Dr. Pande about any questions that rose up. The research process was challenging, as the proposal is a first of its kind in California so there were not many resources to draw from, and the ones I did find were quite technical.

I was able to learn a lot about good research techniques by working through this process on my own, and at the same time learn a lot about transportation engineering, specifically about how safety and efficiency are measured which I found really interesting. Transportation has always been something that interested me, and seeing how technical and precise the work around it can be has made me want to pursue it even more."

"I worked on research regarding wireless charging roads that have built in chargers that you vehicle could get charge from as it was above the road. We wanted to see the optimum way these could be implemented, and I was looking at past research where they have completed this successfully.

I learned that research is a continuous and you must stay with it because results are often hard to see in the short term." 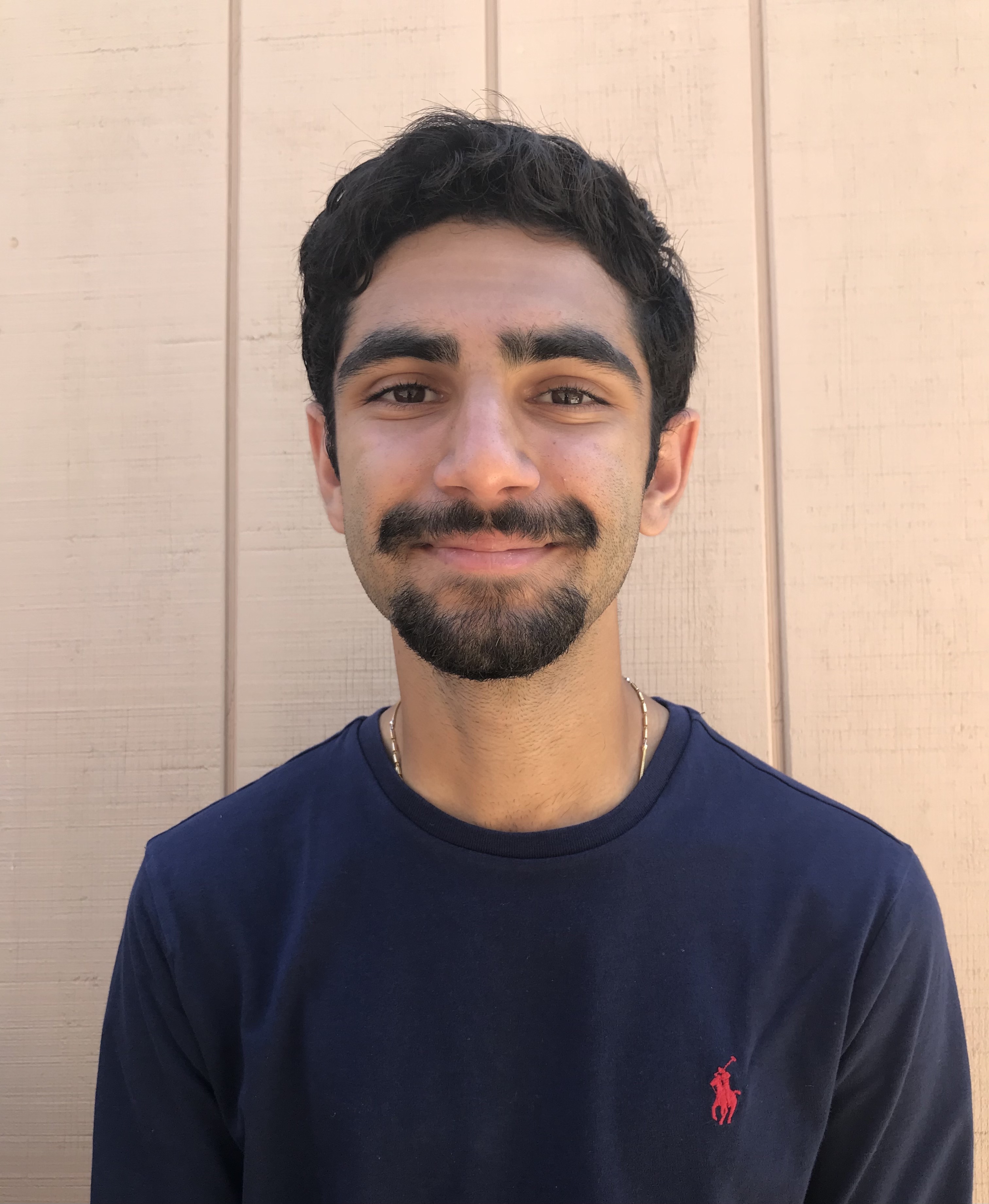 "The topic I focused on for researching was figuring out designs on how we can accommodate autonomous vehicles onto roads and highways, with new infrastructure ideas. In other words, considering that the future of transportation is becoming more and more autonomous, I was responsible for researching different infrastructure plans for roads, highways, bridges, and other structures that are safe for vehicles and pedestrians to travel on in a sustainable way. Since most of our learning is virtual, it can be easy to become distracted and lose motivation to do your work but by being disciplined and using your time wisely, I was able to overcome this huge hurdle.

Something impactful that I've learned from this experience is that with your research, you're predicting the future with the work you are researching you on, where sometime in the future, you're work might be implemented and used for the betterment of society."

"The work I did for Dr. Alzraiee was focused on the creation of a cloud-based framework that would integrate GIS (Geographic information system) data with a 3D point cloud. The purpose of this framework would be to give decision makers at Departments of Transportation (DOTs) a better tool for analyzing transportation assets, such as bridges, roads, etc. and in that way allow them to make decisions regarding the management and maintenance of these assets based on more data and data that is more reliable than human observations. My actual research was mostly reading a number of papers on this topic so that I would have the background knowledge to write our research paper. My partner, Jessica, and I would read these papers and do various tasks towards wiring the paper (such as writing the introduction) and would meet virtually with Dr. Alzraiee once a week to discuss our progress and ask him any questions that came up during our research.

I would say the most impactful thing I learned or noticed during this research was the way that technology can vastly improve the sustainability of civil engineering tasks. If DOTs were to adopt a framework like the one we are proposing, they would save time and money by using drones to collect data on transportation assets instead of human workers. Additionally, this framework would allow the most accurate decisions on the maintenance of these assets to be made, therefore guaranteeing that money would not be wasted replacing a bridge that doesn't need to be replaced, for example."

"We used a program Professor Talke created to visualize the depths of certain inlets, which are the openings of rivers into larger bodies of water. We compare this with older historical data to find the effect humanity has had on these inlets. There was virtually no difference I could envision between doing this in a virtual or non-virtual environment, seeing as how this mostly electronic work; using a program and navigating different websites to find the data needed. Most difficulties that I encountered are those that come with coding projects of this kind, such as finding data that doesn't fit nicely together or having to edit parts of the code to accommodate said data.

The most impactful things I learned were the uses of coding in civil engineering along with the experience of working on a team."

"I have been researching how to improve asset management for transportation-related structures. Specifically, I have been looking into using LiDAR and GID to make a 3D point cloud model that can be used to replicate both the current build and the effects of future events on the integrity of a structure. In a virtual environment, both my partner, Will Killmond, and I researched the topic independently, but we are collaborating on a paper, and we have weekly meetings with Professor Alzraiee. It was challenging to coordinate everything, since Will and I never met in person to work on the project, but there weren't any big problems to navigate because of the virtual environment.

I learned how to look at problems from a different angle. I never knew much about transportation engineering before this, but my research is giving me a new perspective when approaching projects."

"The research project that I worked on was using nanoparticles coated in PEI to determine if there is E-coli in water. The nanoparticles have to first be coated in PEI, then they can undergo a process where they change the color of the water if there are any bacteria in the water. The virtual environment was difficult because I wasn’t able to be hands-on with the project, although it was difficult there was a lot I still learned.

One of the most interesting and impactful things that I learned on this project was just the research process of having a hypothesis and being able to test it along with changing the hypothesis after finding new information."

"I worked on examining data that simulated a structure or system failing. There were various models, and my partner and I had to use metrics to compare the models against each other. This could improve structural failure forecasting in the future by helping researches know which model is most accurate and effective in its predictions. The project was very technical, so there was a steep learning curve to understanding the terms and equations we used.

I believe the most impactful thing I learned was continuing to gain experience in taking the initiative. In classes, the exact work you need to do is given to you. In research, things are more open-ended and you may not know what to do next."

"I worked on a paper that investigated the application of terrestrial laser scanners(TLS) in steel bridge inspection. My participation was virtual, consisting of weekly zoom meetings and frequent communication with Luke Psomas, a second-year CE major who was also working on the paper. Navigating the virtual environment was definitely challenging, but I felt that I was well-supported by Dr. Alzraiee and Luke P.

One of the most interesting parts was opening the scans in Scene (a software for 3D laser scanners) and seeing a model of the bridge come to life in the program."

"My name is Abbie Wong, and I am a 1st year Civil Engineering major. I worked with Dr. Long Wang and my research was on using the in-built sensors in the smartphone to evaluate human body position and balance control. Using the Science Journal app on my iPhone, I performed various motions, such as standing still, walking, and squatting, and used the calibrated accelerometers to observe the changes in horizontal and vertical movements around my center of gravity. Through several zoom meetings, Dr. Wang guided me through challenges in researching accelerometers and helped me to understand that while they can detect the magnitude and direction, they can also be used to sense orientation. The most impactful thing I learned during my time researching is that as one’s center of gravity is altered, problems with mobility and balance arise. Understanding the effects of any change in postural sway is important to better assess and evaluate the risk of falls and limit the magnitude of injuries. This was a great opportunity to see structural analysis research being applied in real world situations. I learned the benefits of how these sensors can monitor public health and be used to better the lives of people in society."