Anurag Pande earned his Bachelor of Technology degree in civil engineering from the Indian Institute of Technology, Bombay in 2002. The summer after his sophomore year, Pande did research for a professor, working in travel demand forecasting while also doing surveys and data analysis. The research eventually became his senior project, and the experience got him interested in applying for graduate school.

University of Central Florida offered Pande a fellowship in 2002, where he earned his doctorate in transportation engineering. While his work as an intern in graduate school was “good,” Pande said it didn’t excite him. After speaking with his advisor who encouraged Pande to consider a career in academia, he finished his degree and worked for a couple of years as a post-doctorate research associate. 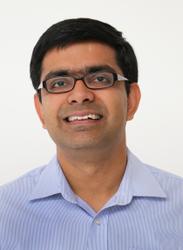 In 2008, Pande came to teach in the civil and environmental engineering department at Cal Poly, and the professor says he’s loved his job ever since.

“You know, that’s the great thing about a faculty position, because you pretty much never have to do work that you don’t like to do, right?” Pande said. “You always get to teach your classes that you love to teach, and in terms of research, it’s always the work that [you] want to do.”

For Pande, producing “good work with good students” has been a highlight of his time at the university.

“What I’ve found is [my students] have really valuable feedback and I’ve been able to work on my teaching,” Pande said. “Not only have I found I’ve become a more effective teacher by looking at that feedback, but because I’m planning a little bit more ahead of time, I’ve become more efficient.”

Amongst the list of research projects on Pande’s plate, two that he said he is most excited about concern the “big picture idea” of looking at before-and-after situations in a different light. Pande said a naïve approach focuses strictly on outcomes before and after a change and simply compared the two.

Alongside other researchers, Pande said he’s looking at the impact of Uber and Lyft and what the total vehicle miles travelled (VMT) would be in San Luis Obispo had those ridesharing companies not been in town.

One thing that Pande said he missed as a young engineering student was “learning the ability to focus” and understanding the value of learning how to learn.

“I think the secret is that pretty much everything that you will do in your careers is going to depend on your skills to be able to learn new ideas and approaches, because things change, from what we learned in school,” Pande said. “So you should absolutely try to learn what is being taught in the classroom, but not necessarily only for that content, but to gain an ability to learn new things.”