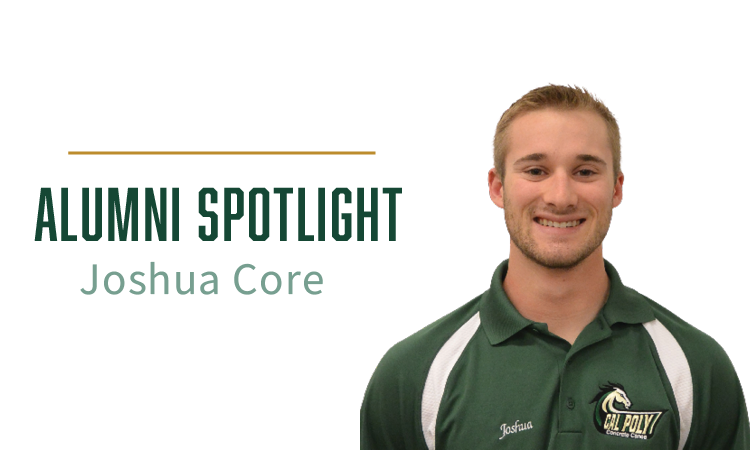 Joshua Core graduated from Cal Poly in 2015 with a BS in Civil Engineering. He then entered the graduate program at Lehigh University in Pennsylvania and graduated a year later with a Master of Engineering (M.ENG) degree in Structural Engineering. Shortly after, he accepted a job with Simpson Gumpertz & Heger (SGH) and has been there ever since.

Joshua works within SGH’s Oakland office, which primarily specializes in Marine and Heavy Civil Engineering. Although this was not his exact educational background, his ability to adapt and learn quickly combined with a supportive team at SGH, has allowed to him to excel in the industry.

Not only has Joshua successfully passed the Practice of Engineering (PE) exam, but he has also contributed to the national and international study of marine engineering. In 2019, he presented at the PORTS conference with his SGH colleagues on their wharf preservation project. The PORTS conference is an internationally recognized event held every year, where hundreds of port, harbor, waterway, and marine professionals from around the globe share their knowledge and learn from the experiences of others. The presentations and papers cover a variety of topics dealing with issues currently facing the marine engineering community.

Looking back at his time at Cal Poly, Joshua recalls his memorable experiences of being a WOW leader and participating in Concrete Canoe. He considers Concrete Canoe to be one of the most challenging projects he has ever been involved in. However, all the time spent working on this project with his team, was well worth it. The team placed 2nd nationally and earned the title for “Innovation of the Year". Most of his team members remain good friends to this day.

In the future, Joshua looks forward to continuing to work for a great company, starting a family, contributing to Cal Poly through the Recent Graduates Alumni Committee (RGAC), and visiting SLO whenever possible!